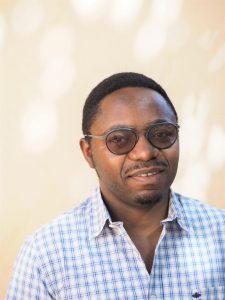 Aymar Nyenyezi Bisoka, born on 05.10. 1982, is a lawyer and political scientist. He received his doctorate degree from the School of Political and Social Sciences of the Université Catholique de Louvain (UCL), Belgium. His doctoral dissertation focused on land grabbing by local elites in the African Great Lakes region, particularly on issues of power and resistance in relation with access to natural resources. In addition to natural resources, his current research focuses on issues related to the peasantry and armed groups in the region, and the Afro-critical thinking. Aymar is involved in collaborative projects at the UCL (where he is also a visiting professor), the University of Burundi, Wageningen University, Cambridge University and Ghent University. He also teaches at the Université Catholique de Bukavu and the Higher Institute of Rural Development in the DRC as associate professor. Before starting his doctoral studies, Aymar was involved with cooperation for development in Africa projects. Many of his scholarly writings are published internationally in French and English in highly reputable journals. Aymar has won several international awards and has recently received two fellowships for research visits to Oxford University in 2019 and Cambridge University in 2020.

Peripheral Rebels and Rural Materialism: Rethinking the Armed Peasantry and the Politics in the East of RDC

On the basis of a rigorous exploratory study that we conducted in the DRC, this project develops the hypothesis that the peasantry is a fully-fledged political actor in the DRC and has been so during the   decades of armed conflict. At the same time, its political importance has been ignored within peace-building, demobilisation and rural development programmes, which explains at least part of their failure. The research brings us to the following central research question: to what extent can peasants in the DRC be considered as political actors? To what extent can the actions, discourses and attitudes of peasants in conflict-affected areas of the DRC-and particularly those of “peripheral rebels”–be considered as a form of “rural materialism”? The project has four specific objectives: (1) First, the project will evaluate whether the peasantry can be represented as a social group with a distinct identity. It will identify the different factors (individual and collective actions, discourse and attitudes, etc.) that support or reject this hypothesis. (2) Second, it will evaluate whether the peasantry can be represented as a distinct political actor, capable of influencing the power apparatus in conflict-affected areas in the DRC. It will identify different forms of cohabitation and arrangements between peasants, armed groups, state institutions, customary institutions, NGOs, churches etc. It will also determine the modalities, the rationales and the factors that shape these different forms of cohabitation. (3) Third, the project will analyse broader rural transformations in the DRC and will examine to which extend “peripheral rebels” and “rural materialism” help us to determine these transformations. (4) And finally, the project will examine the political implications of the conclusions drawn from the three former research objectives.