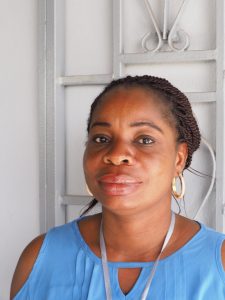 Nome Rose De Lima Essoh, born on 23.08.1978, defended her doctoral thesis in Cultural History at the Felix Houphouët Boigny University in Abidjan (Ivory Coast) in 2012. Her research focused on the functioning of endogenous African social entities, particularly those of Odzukru, lagoon people from the South of Ivory Coast. Following her recruitment as a teacher-researcher, in the History Department of Alassane Ouattara University in Boauké (Ivory Coast), she turned to new lines of research by tackling the question of gender through the perception of African societies of women, and social, cultural and religious changes in Ivorian societies. As such, she has produced and published around or about ten scientific articles on these different themes. Assistant Master, she also participated in several national and international scientific meetings in France, Benin, Senegal and Côte d’Ivoire. In addition, her scientific commitment has given her the opportunity to join the management bodies since2013 of the electronic journal of History of Arts and Archaeology called Sifoè.

Pentecostal Movement in Odzukru Country : Offers and Reconfiguration of the Religious Space in the South of Ivory Coast

Classical religions (Catholicism, Protestantism, harrism) have for a long time been the spear head of evangelization in the South of the Ivory Coast, particularly in the Odzukru country. Without real competitors, they appropriated religious space to the point of having a monopoly. However, for several decades this monopoly has been called into question by the incursion of Pentecostal movements. Indeed, at the beginning of the 1980s, Ivory Coast experienced an unprecedented religious revival which had its origins in the socio-economic crisis it was going through at that time. The social difficulties caused by this crisis are the bed of Pentecostal movements which are swarming in many cities and towns across the country. The Odzukru country, due to its proximity to Abidjan, the economic capital of the Ivory Coast inevitably becomes a zone of predilection for Pentecostal missions. This presence, while reshaping the religious landscape, contributes to the diversification of religious choices and offers. This reshaping then poses a crucial problem of cohabitation between these different religious movements and the sociological and cultural environments, particularly rural ones, in which these new forms of evangelization are deployed. How did the Pentecostal movements manage to penetrate and redefine this religious space? How do they fit in? What type of relationship do they have at the same time with classical religions, social entities and cultural practices, the foundation of rural societies? These are the concerns that our study seeks to address, which aims to analyze the ability of Pentecostal movements to integrate into the Odzukru religious universe to the point of upsetting religious habits and arousing great interest among the populations. Our methodological approach will consist of analyzing the oral sources collected in the field during our investigations, and the documentary research, comparing them, then extracting useful information to respond to the concerns of the study.