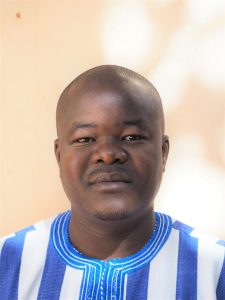 Zakaria Soré, born on 31.12.1980, has a unique doctorate in sociology since January 2015 and is a teacher-researcher and assistant professor in the Department of Sociology at Joseph Ki-Zerbo University in Burkina Faso. First Doctor of Sociology at the University of Ouagadougou, his research focuses on education, social movements and the development of security from below in the context of terrorist peril and organized crime. On these themes, he has many publications and has been a member of several research projects including, Security and fragile states – the spaces of vigilante legitimacy in Burkina Faso ; Y en a marre, Filimbi, Lucha et Balai citoyen : Consonances et dissonances de mouvements d’engagement citoyen en Afrique. Zakaria Soré also participated in major scientific meetings on the issue of peace, security, social mobilizations and educational strategies, and led several conferences and panels on these different themes. He also contributed to important collective works, among which, Mouvements sociaux et changements politiques en Afrique; A Certain Amount of Madness. The Life, Politics and Legacies of Thomas Sankara ; Mobilités, circulations et frontières : mobilités et développement en Afrique.

Burkina Faso experienced the first terrorist attack on its territory in 2015. If at that time, the attacks were localized in the Sahel Region and directed against the symbols of the State, in recent times, they spread and the populations also became targets of them. They are victims of targeted killings, orders to leave their villages, and subjected to tax and allegiance payments. Terrorist impose new conduct on certain sections of the population and prohibit certain economic activities. Faced with this attempt to impose a new socio-political and economic order, the state shines through its absence. Indeed, the State, due to the weak security network of the territory, is struggling to ensure the security of the populations. In this context of uncertainty, community actions are developing whose objective is to ensure the survival of the land and allow the populations to stay there and carry out their activities. If the violence of the attacks and their disproportionate nature has led to population migrations, some remain there and develop resilience strategies. These strategies range from cunning with these groups to the formation of vigilantism and surveillance groups of the territory through education actions aimed at contesting the legitimacy of the order which the terrorist and drug trafficking groups are trying to impose. The objective of this research is to succeed in grasping the strategies and modes of organization of community resistance in the province of Bam in north-central Burkina Faso.